Kubb is a traditional game from Sweden. According to legend, this would have been an old Viking game. Others say that this game was started while collecting firewood. This is how 'throwing sticks' came into existence. Kubb is a game for outside and is played on a terrain of 8x5 meters, usually on grass. But it can also be played on sand, gravel, snow or even concrete.
​
A kubbset consists out of the following parts: ​The players are divided into 2 teams and take place behind their baseline. (5) 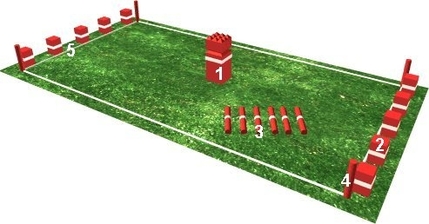 The aim of the game is to knock over all the kubbs on the opponent's field with the wooden batons with your team.
Whoever succeeds first in this may throw a shot at the king. The team that can knock down the king wins the game. That is basically what the game is all about. There is, of course, much more to it. You can find the complete rules here. Or watch the video below: